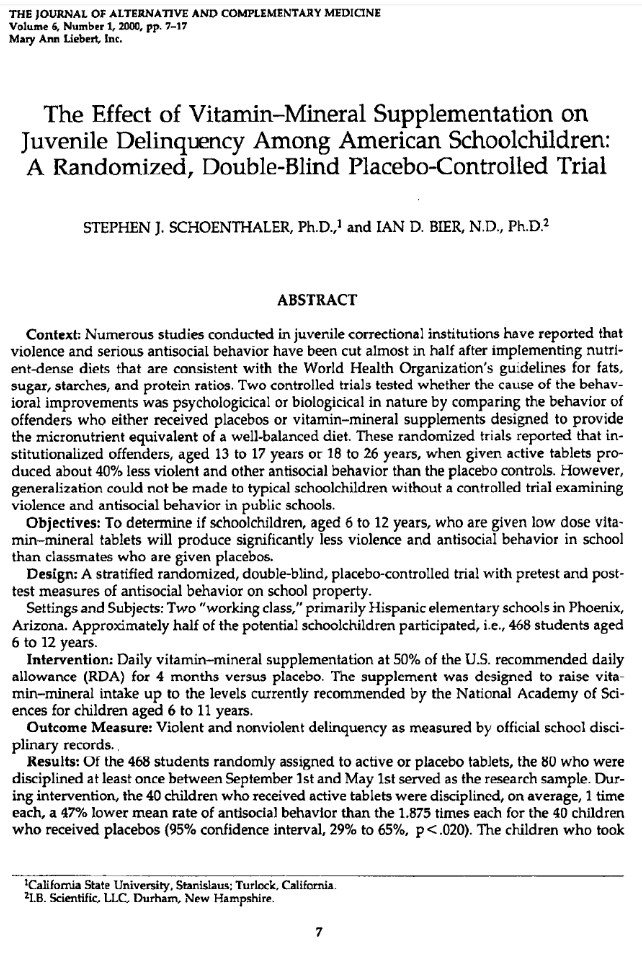 The effect of randomized vitamin-mineral supplementation on violent and non-violent antisocial behavior among incarcerated juveniles.

In a randomized controlled double-blind trial, the effects of vitamin±mineral supplementation on violence and other serious antisocial behavior were studied for 3 months on 62 con®ned delinquents aged 13 to 17 years. A signi®cant difference between 32 active and 30 placebo subjects was found for violent and non-violent antisocial behavior. The net difference in rule infractions between the active and placebo groups in violence was 28% (95% con®dence interval 15±41% ). This direction and magnitude of effect were seen with both violent and non-violent rule violations. Twenty-six habitually violent subjects donated pre- and post-intervention blood samples. Among 10 subjects who maintained their normal or low blood concentrations of vitamins throughout the trial, there was no marked change in violence (i.e. 39 acts during baseline and 37 during intervention). In contrast, the 16 subjects who corrected their low blood vitamin concentrations during intervention produced 131 violent acts during baseline and 11 during intervention. The correction of low blood vitamin concentrations with vitamin±mineral supplements improves brain function and signi®cantly reduces violence among delinquents con®ned in correctional facilities.