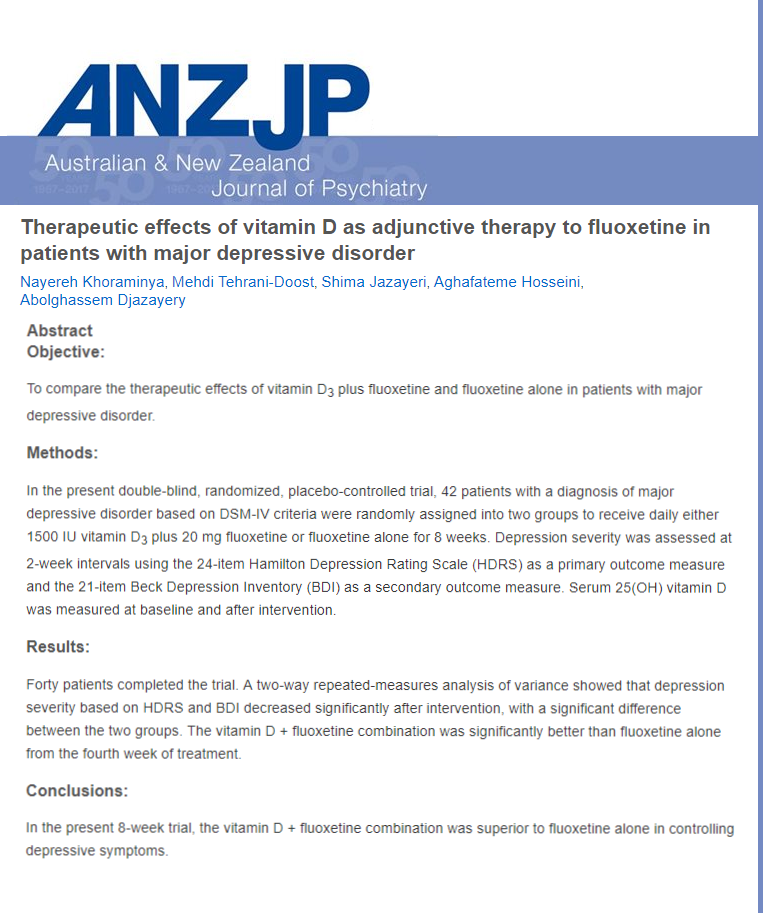 OBJECTIVE: To compare the therapeutic effects of vitamin D3 plus fluoxetine and fluoxetine alone in patients with major depressive disorder.

METHODS: In the present double-blind, randomized, placebo-controlled trial, 42 patients with a diagnosis of major depressive disorder based on DSM-IV criteria were randomly assigned into two groups to receive daily either 1500 IU vitamin D3 plus 20 mg fluoxetine or fluoxetine alone for 8 weeks. Depression severity was assessed at 2-week intervals using the 24-item Hamilton Depression Rating Scale (HDRS) as a primary outcome measure and the 21-item Beck Depression Inventory (BDI) as a secondary outcome measure. Serum 25(OH) vitamin D was measured at baseline and after intervention.

RESULTS: Forty patients completed the trial. A two-way repeated-measures analysis of variance showed that depression severity based on HDRS and BDI decreased significantly after intervention, with a significant difference between the two groups. The vitamin D + fluoxetine combination was significantly better than fluoxetine alone from the fourth week of treatment.

CONCLUSIONS: In the present 8-week trial, the vitamin D + fluoxetine combination was superior to fluoxetine alone in controlling depressive symptoms.