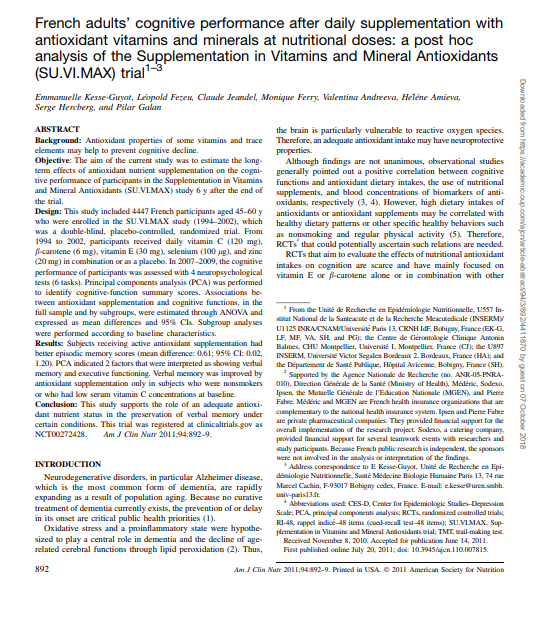 BACKGROUND: Antioxidant properties of some vitamins and trace elements may help to prevent cognitive decline.

OBJECTIVE: The aim of the current study was to estimate the long-term effects of antioxidant nutrient supplementation on the cognitive performance of participants in the Supplementation in Vitamins and Mineral Antioxidants (SU.VI.MAX) study 6 y after the end of the trial.

DESIGN: This study included 4447 French participants aged 45-60 y who were enrolled in the SU.VI.MAX study (1994-2002), which was a double-blind, placebo-controlled, randomized trial. From 1994 to 2002, participants received daily vitamin C (120 mg), β-carotene (6 mg), vitamin E (30 mg), selenium (100 μg), and zinc (20 mg) in combination or as a placebo. In 2007-2009, the cognitive performance of participants was assessed with 4 neuropsychological tests (6 tasks). Principal components analysis (PCA) was performed to identify cognitive-function summary scores. Associations between antioxidant supplementation and cognitive functions, in the full sample and by subgroups, were estimated through ANOVA and expressed as mean differences and 95% CIs. Subgroup analyses were performed according to baseline characteristics.

RESULTS: Subjects receiving active antioxidant supplementation had better episodic memory scores (mean difference: 0.61; 95% CI: 0.02, 1.20). PCA indicated 2 factors that were interpreted as showing verbal memory and executive functioning. Verbal memory was improved by antioxidant supplementation only in subjects who were nonsmokers or who had low serum vitamin C concentrations at baseline.

CONCLUSION: This study supports the role of an adequate antioxidant nutrient status in the preservation of verbal memory under certain conditions. This trial was registered at clinicaltrials.gov as NCT00272428.

A post hoc analysis of the supplementation in vitamins and minerals antioxidants (SU.VI.MAX) trial