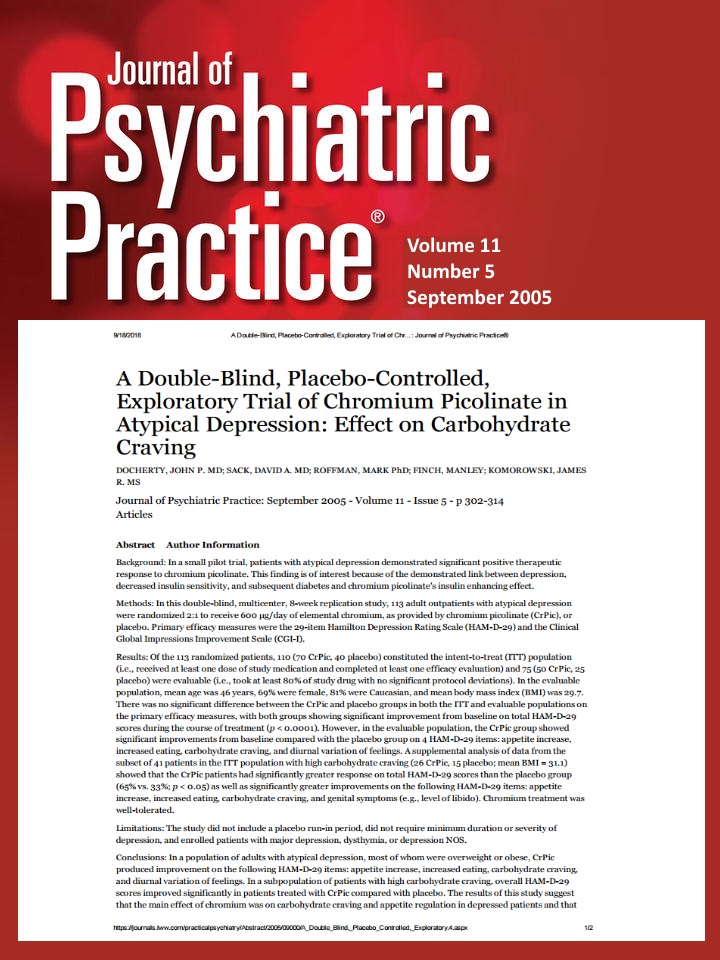 RESULTS: Of the 113 randomized patients, 110 (70 CrPic, 40 placebo) constituted the intent-to-treat (ITT) population (i.e., received at least one dose of study medication and completed at least one efficacy evaluation) and 75 (50 CrPic, 25 placebo) were evaluable (i.e., took at least 80% of study drug with no significant protocol deviations). In the evaluable population, mean age was 46 years, 69% were female, 81% were Caucasian, and mean body mass index (BMI) was 29.7. There was no significant difference between the CrPic and placebo groups in both the ITT and evaluable populations on the primary efficacy measures, with both groups showing significant improvement from baseline on total HAM-D-29 scores during the course of treatment (p < 0.0001). However, in the evaluable population, the CrPic group showed significant improvements from baseline compared with the placebo group on 4 HAM-D-29 items: appetite increase, increased eating, carbohydrate craving, and diurnal variation of feelings. A supplemental analysis of data from the subset of 41 patients in the ITT population with high carbohydrate craving (26 CrPic, 15 placebo; mean BMI = 31.1) showed that the CrPic patients had significantly greater response on total HAM-D-29 scores than the placebo group (65% vs. 33%; p < 0.05) as well as significantly greater improvements on the following HAM-D-29 items: appetite increase, increased eating, carbohydrate craving, and genital symptoms (e.g., level of libido). Chromium treatment was well-tolerated.

LIMITATIONS: The study did not include a placebo run-in period, did not require minimum duration or severity of depression, and enrolled patients with major depression, dysthymia, or depression NOS.