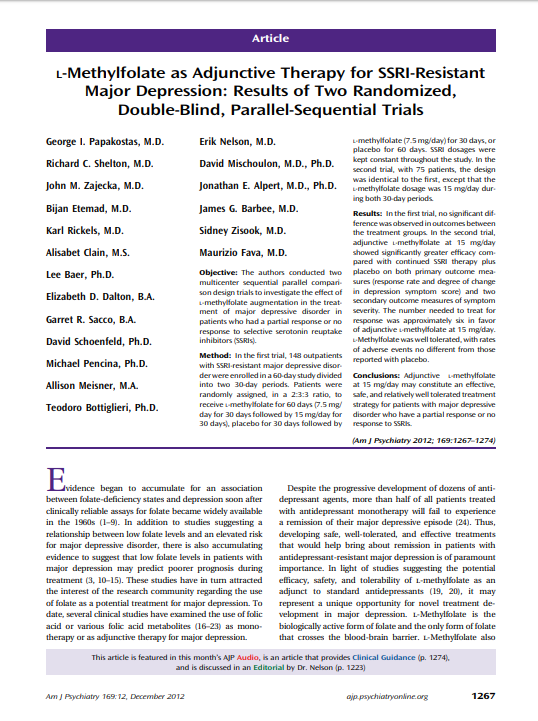 The authors conducted two multicenter sequential parallel comparison design trials to investigate the effect of L- augmentation in the treatment of major depressive disorder in patients who had a partial response or no response to selective serotonin reuptake inhibitors (SSRIs).

In the first trial, 148 outpatients with SSRI-resistant major depressive disorder were enrolled in a 60-day study divided into two 30-day periods. Patients were randomly assigned, in a 2:3:3 ratio, to receive L-methylfolate for 60 days (7.5 mg/day for 30 days followed by 15 mg/day for 30 days), placebo for 30 days followed by L-methylfolate (7.5 mg/day) for 30 days, or placebo for 60 days. SSRI dosages were kept constant throughout the study. In the second trial, with 75 patients, the design was identical to the first, except that the l-methylfolate dosage was 15 mg/day during both 30-day periods.

In the first trial, no significant difference was observed in outcomes between the treatment groups. In the second trial, adjunctive L- at 15 mg/day showed significantly greater efficacy compared with continued SSRI therapy plus placebo on both primary outcome measures (response rate and degree of change in depression symptom score) and two secondary outcome measures of symptom severity. The number needed to treat for response was approximately six in favor of adjunctive L- at 15 mg/day. L-Methylfolate was well tolerated, with rates of adverse events no different from those reported with placebo.

Adjunctive L- at 15 mg/day may constitute an effective, safe, and relatively treatment strategy for patients with depressive disorder who have a partial response or no response to SSRIs.