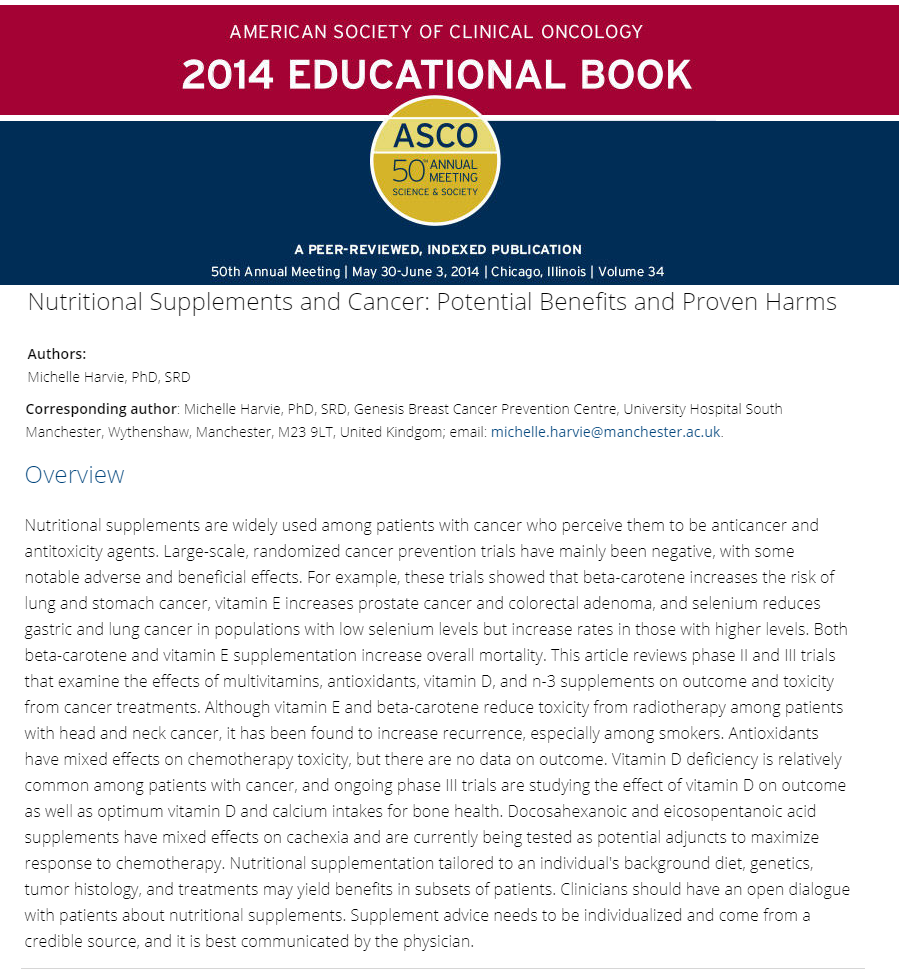 Nutritional supplements are widely used among patients with cancer who perceive them to be anticancer and antitoxicity agents. Large-scale, randomized cancer prevention trials have mainly been negative, with some notable adverse and beneficial effects. For example, these trials showed that beta-carotene increases the risk of lung and stomach cancer, vitamin E increases prostate cancer and colorectal adenoma, and selenium reduces gastric and lung cancer in populations with low selenium levels but increase rates in those with higher levels. Both beta-carotene and vitamin E supplementation increase overall mortality. This article reviews phase II and III trials that examine the effects of multivitamins, antioxidants, vitamin D, and n-3 supplements on outcome and toxicity from cancer treatments. Although vitamin E and beta-carotene reduce toxicity from radiotherapy among patients with head and neck cancer, it has been found to increase recurrence, especially among smokers. Antioxidants have mixed effects on chemotherapy toxicity, but there are no data on outcome. Vitamin D deficiency is relatively common among patients with cancer, and ongoing phase III trials are studying the effect of vitamin D on the outcome as well as optimum vitamin D and calcium intakes for bone health. Docosahexanoic and eicosopentanoic acid supplements have mixed effects on cachexia and are currently being tested as potential adjuncts to maximize response to chemotherapy. Nutritional supplementation tailored to an individual’s background diet, genetics, tumor histology, and treatments may yield benefits in subsets of patients. Clinicians should have an open dialogue with patients about nutritional supplements. Supplement advice needs to be individualized and come from a credible source, and it is best communicated by the physician.