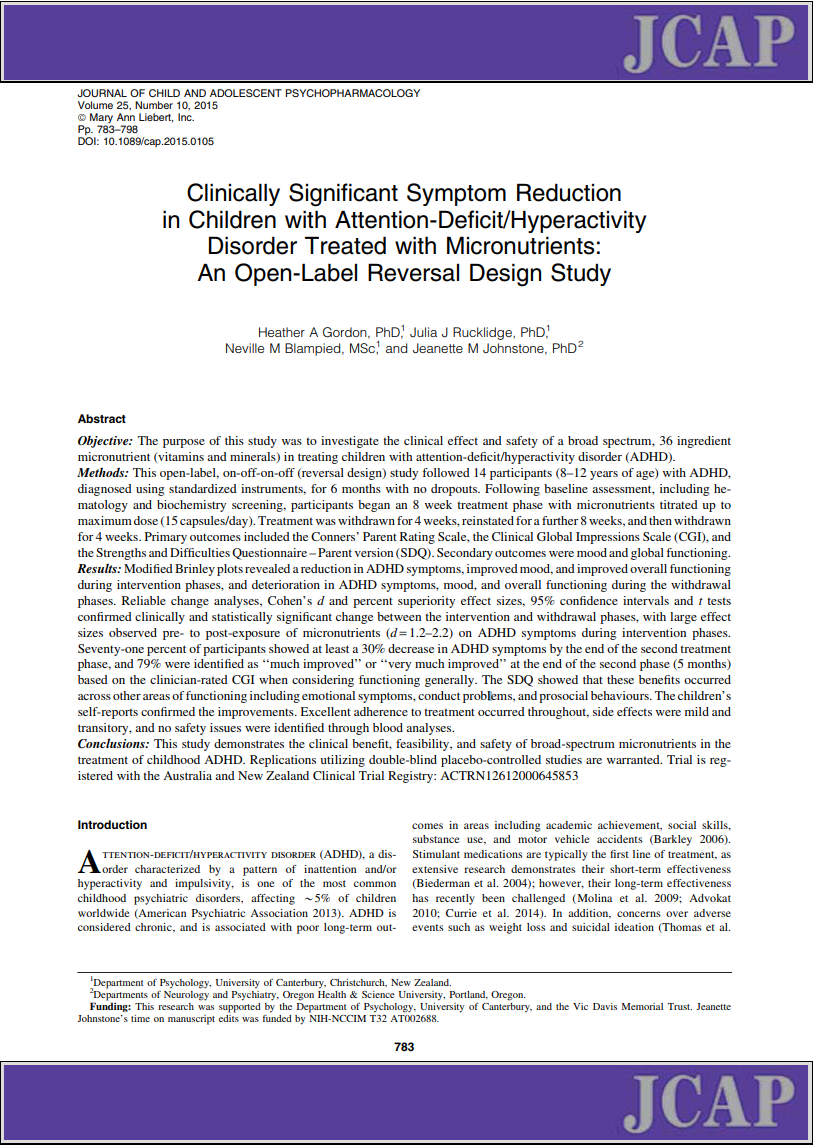 OBJECTIVE: The purpose of this study was to investigate the clinical effect and safety of a broad spectrum, 36 ingredient micronutrient (vitamins and minerals) in treating children with attention-deficit/hyperactivity disorder (ADHD).

RESULTS: Modified Brinley plots revealed a reduction in ADHD symptoms, improved mood, and improved overall functioning during intervention phases, and deterioration in ADHD symptoms, mood, and overall functioning during the withdrawal phases. Reliable change analyses, Cohen’s d and percent superiority effect sizes, 95% confidence intervals and t tests confirmed clinically and statistically significant change between the intervention and withdrawal phases, with large effect sizes observed pre- to post-exposure of micronutrients (d = 1.2-2.2) on ADHD symptoms during intervention phases. Seventy-one percent of participants showed at least a 30% decrease in ADHD symptoms by the end of the second treatment phase, and 79% were identified as “much improved” or “very much improved” at the end of the second phase (5 months) based on the clinician-rated CGI when considering functioning generally. The SDQ showed that these benefits occurred across other areas of functioning including emotional symptoms, conduct problems, and prosocial behaviours. The children’s self-reports confirmed the improvements. Excellent adherence to treatment occurred throughout, side effects were mild and transitory, and no safety issues were identified through blood analyses.

CONCLUSIONS: This study demonstrates the clinical benefit, feasibility, and safety of broad-spectrum micronutrients in the treatment of childhood ADHD. Replications utilizing double-blind placebo-controlled studies are warranted. Trial is registered with the Australia and New Zealand