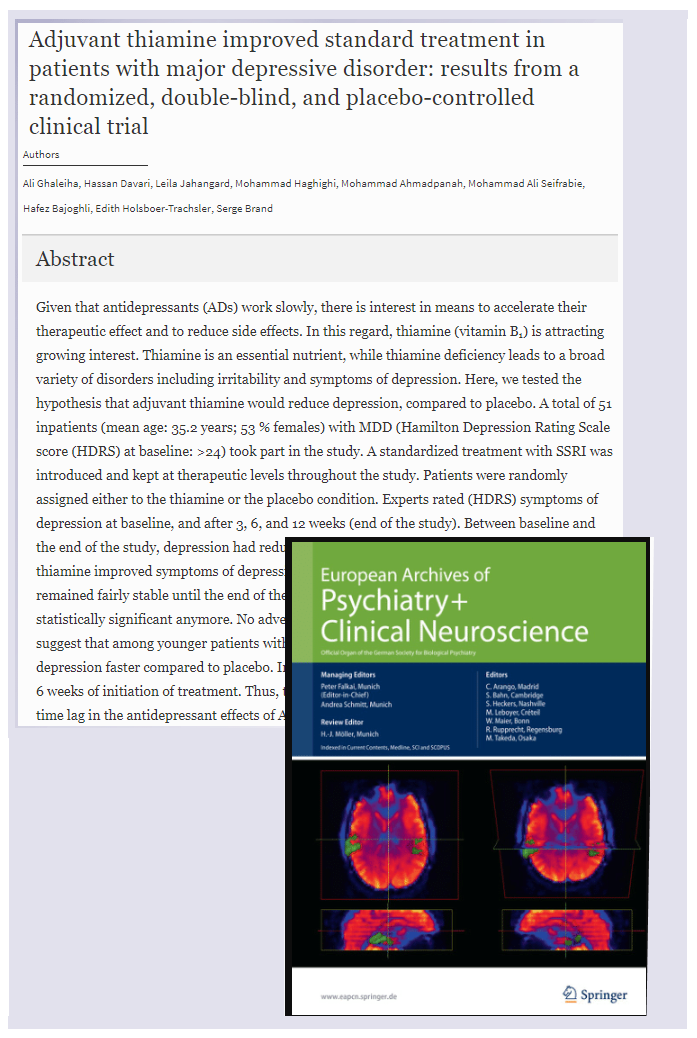 Given that antidepressants (ADs) work slowly, there is interest in means to accelerate their therapeutic effect and to reduce side effects. In this regard, thiamine (vitamin B1) is attracting growing interest. Thiamine is an essential nutrient, while thiamine deficiency leads to a broad variety of disorders including irritability and symptoms of depression. Here, we tested the hypothesis that adjuvant thiamine would reduce depression, compared to placebo. A total of 51 inpatients (mean age: 35.2 years; 53 % females) with MDD (Hamilton Depression Rating Scale score (HDRS) at baseline: >24) took part in the study. A standardized treatment with SSRI was introduced and kept at therapeutic levels throughout the study. Patients were randomly assigned either to the thiamine or the placebo condition. Experts rated (HDRS) symptoms of depression at baseline, and after 3, 6, and 12 weeks (end of the study). Between baseline and the end of the study, depression had reduced in both groups. Compared to placebo, adjuvant thiamine improved symptoms of depression after 6 week of treatment, and improvements remained fairly stable until the end of the study, though mean differences at week 12 were not statistically significant anymore. No adverse side effects were reported in either group. Results suggest that among younger patients with MDD adjuvant thiamine alleviated symptoms of depression faster compared to placebo. Importantly, improvements were observed within 6 weeks of initiation of treatment. Thus, thiamine might have the potential to counteract the time lag in the antidepressant effects of ADs.

Results from a randomized, double-blind, and placebo-controlled clinical trial.