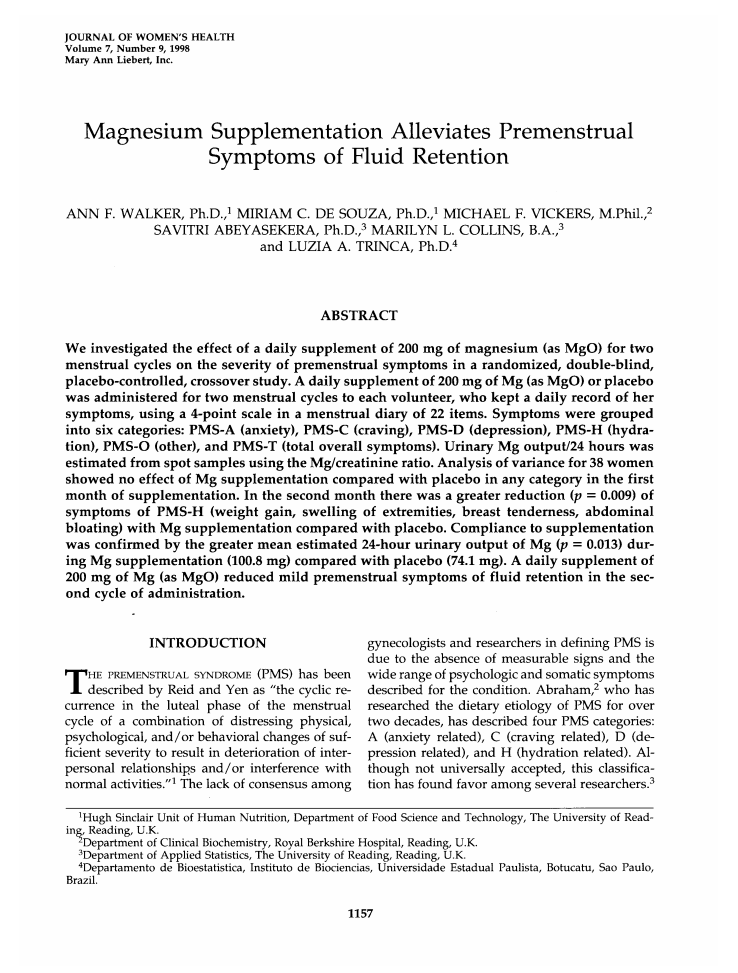 We investigated the effect of a daily supplement of 200 mg of magnesium (as MgO) for two menstrual cycles on the severity of premenstrual symptoms in a randomized, double-blind, placebo-controlled, crossover study. A daily supplement of 200 mg of Mg (as MgO) or placebo was administered for two menstrual cycles to each volunteer, who kept a daily record of her symptoms, using a 4-point scale in a menstrual diary of 22 items. Symptoms were grouped into six categories: PMS-A (anxiety), PMS-C (craving), PMS-D (depression), PMS-H (hydration), PMS-O (other), and PMS-T (total overall symptoms). Urinary Mg output/24 hours was estimated from spot samples using the Mg/creatinine ratio. Analysis of variance for 38 women showed no effect of Mg supplementation compared with placebo in any category in the first month of supplementation. In the second month there was a greater reduction (p = 0.009) of symptoms of PMS-H (weight gain, swelling of extremities, breast tenderness, abdominal bloating) with Mg supplementation compared with placebo. Compliance to supplementation was confirmed by the greater mean estimated 24-hour urinary output of Mg (p = 0.013) during Mg supplementation (100.8 mg) compared with placebo (74.1 mg). A daily supplement of 200 mg of Mg (as MgO) reduced mild premenstrual symptoms of fluid retention in the second cycle of administration.

A randomized double-blind placebo-controlled trial investigating the behavioral effects of vitamin, mineral and n-3 fatty acid supplementation in typically developing adolescent schoolchildren. Abstract: Nutrient deficiencies have been implicated in anti-social behaviour in schoolchildren; hence, correcting them may improve sociability. We...