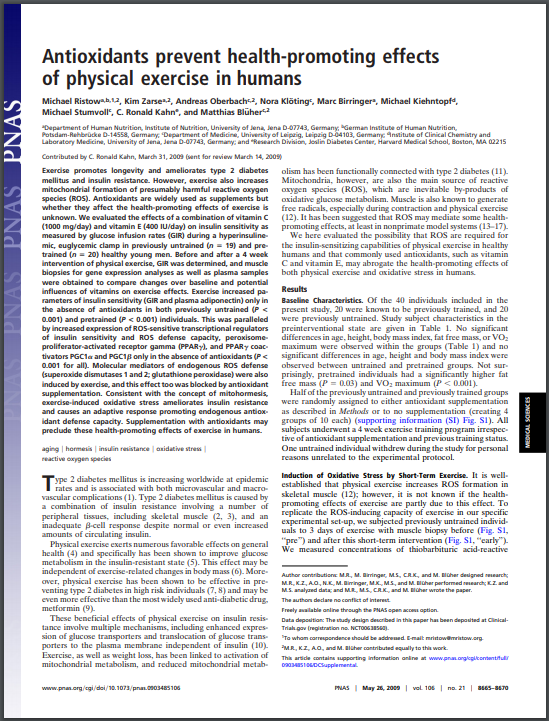 Exercise promotes longevity and ameliorates type 2 diabetes mellitus and insulin resistance. However, exercise also increases mitochondrial formation of presumably harmful reactive oxygen species (ROS). Antioxidants are widely used as supplements but whether they affect the health-promoting effects of exercise is unknown. We evaluated the effects of a combination of vitamin C (1000 mg/day) and vitamin E (400 IU/day) on insulin sensitivity as measured by glucose infusion rates (GIR) during a hyperinsulinemic, euglycemic clamp in previously untrained (n = 19) and pretrained (n = 20) healthy young men. Before and after a 4 week intervention of physical exercise, GIR was determined, and muscle biopsies for gene expression analyses as well as plasma samples were obtained to compare changes over baseline and potential influences of vitamins on exercise effects. Exercise increased parameters of insulin sensitivity (GIR and plasma adiponectin) only in the absence of antioxidants in both previously untrained (P < 0.001) and pretrained (P < 0.001) individuals. This was paralleled by increased expression of ROS-sensitive transcriptional regulators of insulin sensitivity and ROS defense capacity, peroxisome-proliferator-activated receptor gamma (PPARgamma), and PPARgamma coactivators PGC1alpha and PGC1beta only in the absence of antioxidants (P < 0.001 for all). Molecular mediators of endogenous ROS defense (superoxide dismutases 1 and 2; glutathione peroxidase) were also induced by exercise, and this effect too was blocked by antioxidant supplementation. Consistent with the concept of mitohormesis, exercise-induced oxidative stress ameliorates insulin resistance and causes an adaptive response promoting endogenous antioxidant defense capacity. Supplementation with antioxidants may preclude these health-promoting effects of exercise in humans.