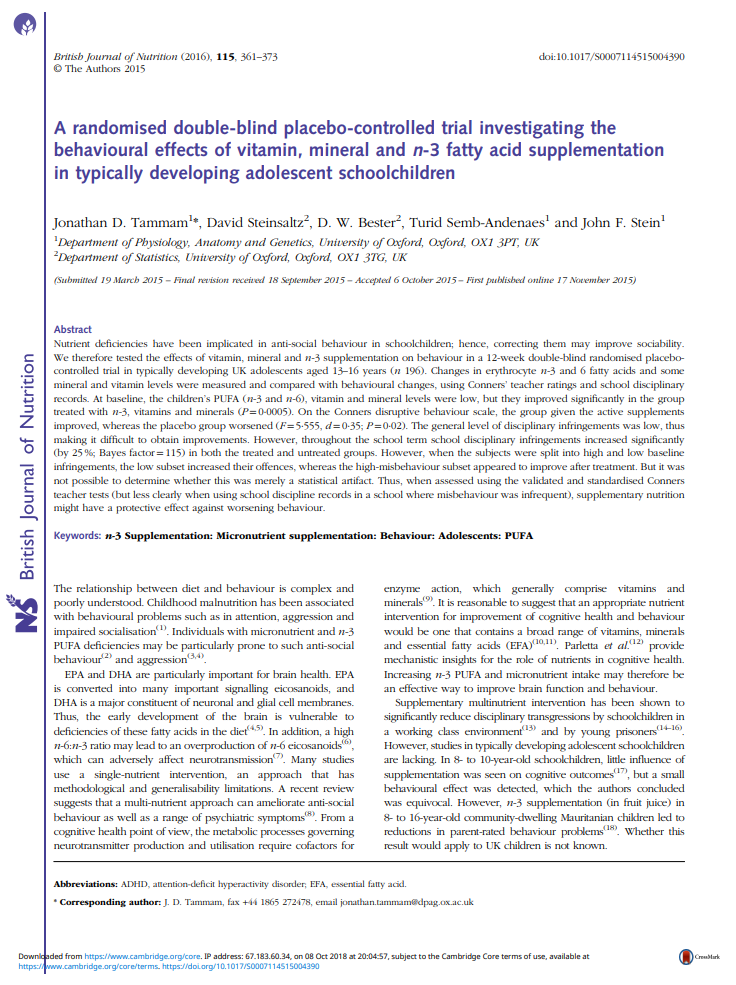 Nutrient deficiencies have been implicated in anti-social behaviour in schoolchildren; hence, correcting them may improve sociability. We therefore tested the effects of vitamin, mineral and n-3 supplementation on behaviour in a 12-week double-blind randomised placebo-controlled trial in typically developing UK adolescents aged 13-16 years (n 196). Changes in erythrocyte n-3 and 6 fatty acids and some mineral and vitamin levels were measured and compared with behavioural changes, using Conners’ teacher ratings and school disciplinary records. At baseline, the children’s PUFA (n-3 and n-6), vitamin and mineral levels were low, but they improved significantly in the group treated with n-3, vitamins and minerals (P=0·0005). On the Conners disruptive behaviour scale, the group given the active supplements improved, whereas the placebo group worsened (F=5·555, d=0·35; P=0·02). The general level of disciplinary infringements was low, thus making it difficult to obtain improvements. However, throughout the school term school disciplinary infringements increased significantly (by 25 %; Bayes factor=115) in both the treated and untreated groups. However, when the subjects were split into high and low baseline infringements, the low subset increased their offences, whereas the high-misbehaviour subset appeared to improve after treatment. But it was not possible to determine whether this was merely a statistical artifact. Thus, when assessed using the validated and standardised Conners teacher tests (but less clearly when using school discipline records in a school where misbehaviour was infrequent), supplementary nutrition might have a protective effect against worsening behaviour.