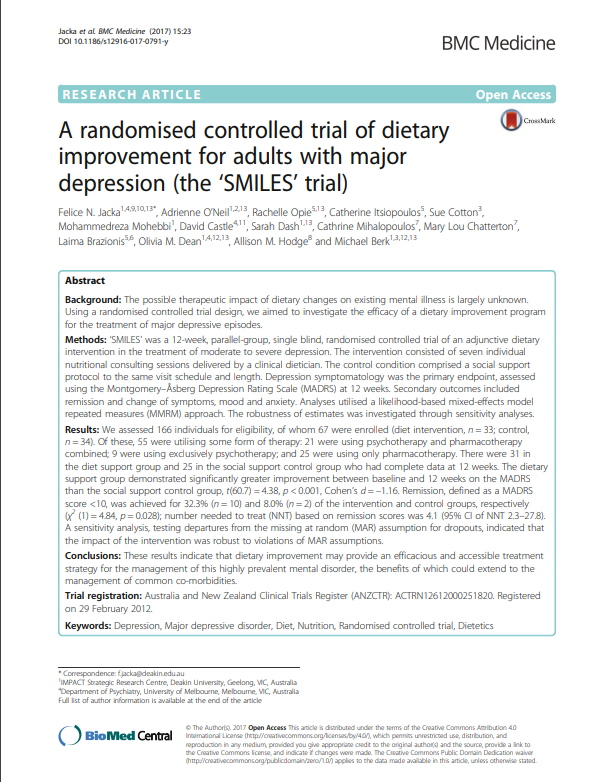 BACKGROUND: The possible therapeutic impact of dietary changes on existing mental illness is largely unknown. Using a randomised controlled trial design, we aimed to investigate the efficacy of a dietary improvement program for the treatment of major depressive episodes.

RESULTS: We assessed 166 individuals for eligibility, of whom 67 were enrolled (diet intervention, n = 33; control, n = 34). Of these, 55 were utilising some form of therapy: 21 were using psychotherapy and pharmacotherapy combined; 9 were using exclusively psychotherapy; and 25 were using only pharmacotherapy. There were 31 in the diet support group and 25 in the social support control group who had complete data at 12 weeks. The dietary support group demonstrated significantly greater improvement between baseline and 12 weeks on the MADRS than the social support control group, t(60.7) = 4.38, p < 0.001, Cohen’s d = -1.16. Remission, defined as a MADRS score <10, was achieved for 32.3% (n = 10) and 8.0% (n = 2) of the intervention and control groups, respectively (χ 2 (1) = 4.84, p = 0.028); number needed to treat (NNT) based on remission scores was 4.1 (95% CI of NNT 2.3-27.8). A sensitivity analysis, testing departures from the missing at random (MAR) assumption for dropouts, indicated that the impact of the intervention was robust to violations of MAR assumptions.

CONCLUSIONS: These results indicate that dietary improvement may provide an efficacious and accessible treatment strategy for the management of this highly prevalent mental disorder, the benefits of which could extend to the management of common co-morbidities. TRIAL