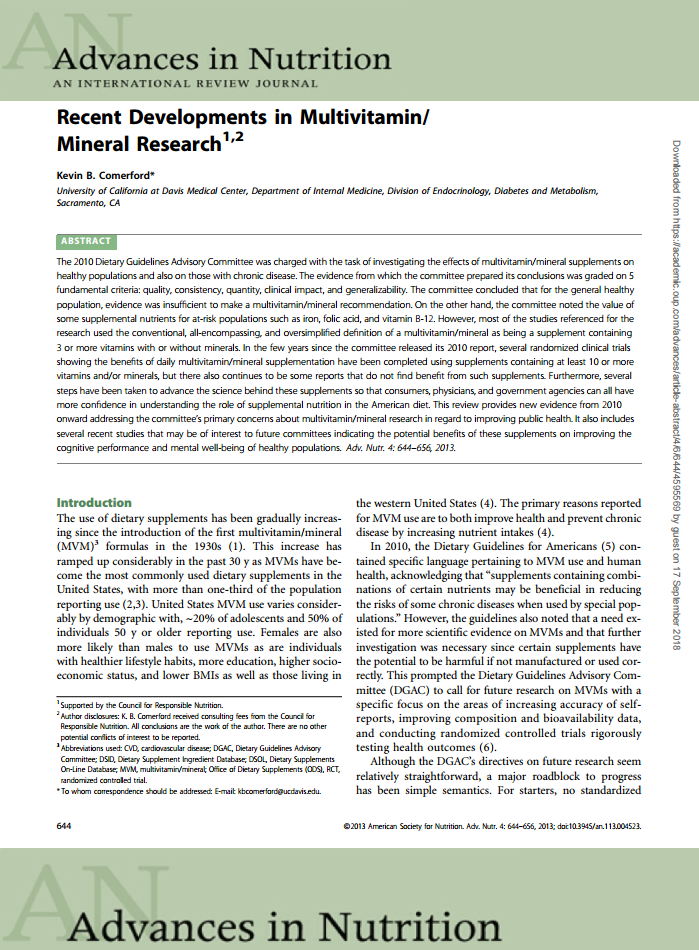 The 2010 Dietary Guidelines Advisory Committee was charged with the task of investigating the effects of multivitamin/mineral supplements on healthy populations and also on those with chronic disease. The evidence from which the committee prepared its conclusions was graded on 5 fundamental criteria: quality, consistency, quantity, clinical impact, and generalizability. The committee concluded that for the general healthy population, evidence was insufficient to make a multivitamin/mineral recommendation. On the other hand, the committee noted the value of some supplemental nutrients for at-risk populations such as iron, folic acid, and vitamin B-12. However, most of the studies referenced for the research used the conventional, all-encompassing, and oversimplified definition of a multivitamin/mineral as being a supplement containing 3 or more vitamins with or without minerals. In the few years since the committee released its 2010 report, several randomized clinical trials showing the benefits of daily multivitamin/mineral supplementation have been completed using supplements containing at least 10 or more vitamins and/or minerals, but there also continues to be some reports that do not find benefit from such supplements. Furthermore, several steps have been taken to advance the science behind these supplements so that consumers, physicians, and government agencies can all have more confidence in understanding the role of supplemental nutrition in the American diet. This review provides new evidence from 2010 onward addressing the committee’s primary concerns about multivitamin/mineral research in regard to improving public health. It also includes several recent studies that may be of interest to future committees indicating the potential benefits of these supplements on improving the cognitive performance and mental well-being of healthy populations.